You are here: Pharmaceutical Society of Northern…|Publications|News|Launch of the New Code

Launch of the New Code 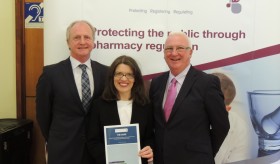 The Pharmaceutical Society NI has launched its new Code (Professional standards of conduct, ethics and performance for pharmacists in Northern Ireland).

At a well-attended launch event on Tuesday 9 February the President Dr Jim Livingstone said “the new Code seeks to modernise the principles to be followed by pharmacists in practise. We know that in reality, the principles set out in this document are followed day and daily by the vast majority of pharmacists in NI, and they recognise the importance and value to both patients and the profession.”

The new code has seen the reduction of key principles from 8 in the 2009 Code to five in the current code. The principles in the new code are:

PRINCIPLE 3: ACT WITH PROFESSIONALISM AND INTEGRITY AT ALL TIMES

PRINCIPLE 5: MAINTAIN AND DEVELOP YOUR KNOWLEDGE, SKILLS AND COMPETENCE

Referring to this change the President commented “The reduction in the number of principles from 8 to 5 helps to make the code more succinct and has enabled the organisation to modernise and update both the language and the content. Below each principle is a series of standards and these give fuller expression to the standards and behaviours expected of pharmacist”

The Registrar Mr Brendan Kerr during his presentation made the point that over the past 5 years, since our last review of the Code, many issues such as whistle-blowing, the duty of candour and issues relating to the use of social media have all moved on. “This Code moves us on five years, and undoubtedly in another five years we will need to revise this Code, but what hasn’t changed and won’t change is the centrality of the first principle –‘Always put the patient first’ and as a pharmacist I know how central this is to all we do”

The key note speaker at the launch was Dr Mark Timoney, Chief Pharmaceutical Officer. In his address Dr Timoney congratulated and complimented the Pharmaceutical Society NI on its new Code and reiterated the key role pharmacy currently plays in the delivery of our healthcare service and empathised how the role of the pharmacist will continue to grow.

Copies of the code can be found on the Pharmaceutical Society NI website at www.psni.org.uk. Following the launch and prior to the Code becoming effective on 1 March 2016,  the Pharmaceutical Society NI are holding two information evenings one in Belfast on 18 February, the other in Cookstown on 23 February further details can be found on the website.