You are here: Pharmaceutical Society of Northern…|Publications|News|A New Era for the PSNI

A New Era for the PSNI 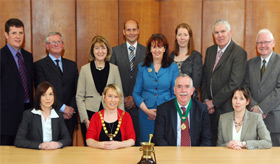 From 1st October 2012, the Pharmaceutical Society NI embarks on a new era, as new legislation in the form of the Pharmacy (NI) Order 1976 (Amendment) Order (NI) 2012 comes into operation, bringing additional fitness to practise sanctions, statutory CPD and a new Council made up of 50% lay and 50% registrant membership.

At the inaugural meeting of the newly constituted Council of the Pharmaceutical Society NI, President of Council, Ms Jacqui Dougan MPSNI, welcomed all members to their new posts.

“After several years of hard work, I am delighted to welcome all members of Council to our new role. We are fortunate to have gained such a wealth of knowledge and expertise in our newly appointed members.

Particularly I would welcome the lay members who I know will bring a range of skills and expertise to this organisation.

I look forward to working with the new Council to deliver effective, transparent and proportionate regulation of pharmacists and pharmacy premises, and ensure that the organisation fulfils its duty of providing public protection.”

The members of the new Council are:

Ms Jacqui Dougan has been appointed as President of the Council for a two year period.

“These are exciting times, there is much work to be done and many changes lie ahead; these changes I believe will benefit both the public and pharmacists. This new Council with its range of talents and experience will guide this organisation through these changes and the work starts today.”